What do all those foods have in common?

They’re identified as “kid food” by children and adults alike.

What else? They’re often served in a highly processed, low-nutrient fashion, and I don’t see many veggies on the list.

My guest today, Bettina Elias Siegel, has been an advocate for school food reform for over 10 years, and her first book Kid Food broadens that mission by pushing for societal change in all the places people feed our kids, market “food” to them, and set our standards of what kids will eat.

If you believe the bar should be raised for kids wayyyyyy beyond and beige and bland, you’re in the right place today.

We dig into some of the more surprising facts Bettina uncovered while researching for Kid Food, such as:

…And so much more! You’ll be inspired by this conversation and ready to change the world, starting in your own home.

No time to watch the whole video? Here are the notes!

Eradicating the Idea of Kid Food

What is Kid Food? 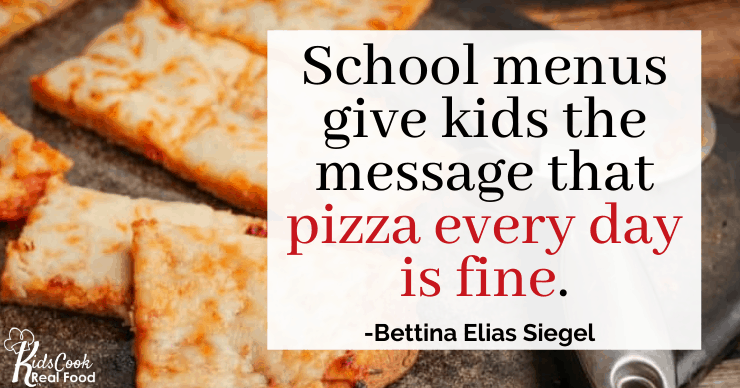 Want to learn how even the tiniest kids can contribute to the family?

Get the free download that will give you recipes and ideas that even little kids can make!

Should Kids Control What They Eat?

We certainly want to give choices but it’s important for parents to put some parameters around those choices. -Bettina Elias Siegel

Childhood obesity is a symptom of a much larger problem, the diet of American children across the board is surprisingly poor given that we’re in one of the wealthiest countries. -Bettina Elias Siegel

Solutions to a Kid Food Culture

A quick note from Katie: We chatted briefly about the free school lunches provided during the pandemic, pros, and cons. To be honest, when I saw processed food wrappers in my teen’s garbage, I asked him if he was grabbing the free breakfast and lunch that’s provided to all students during the pandemic. He admitted he had, and I asked him not to — but here’s my reasoning: If he wants to eat processed granola bars, he can ask me and I’ll buy them in moderation, or he can buy them with his own money. I am strongly opposed to taxpayer money being used to feed kids whose families can afford breakfast and lunch, and I felt it was wrong to utilize that system when I don’t believe it’s intended to serve my son. (Just like I didn’t file for government stimulus for my business in March/April 2020, because I was able to cover my payroll and felt others who were truly struggling should get the aid.)

But – I’d actually never heard of the idea of universal school meals for free until I read Bettina’s work, and I didn’t realize that was something that people were trying to accomplish even before 2020 hit. She advocates that it will strengthen the school lunch program and improve nutritional standards, as well as what’s actually going on the trays of kids everywhere.

I need more time to think about that because I’m not sure I’m wrapping my brain around how it would work — so Bettina and I may disagree on this, and that’s ok because I’m sure there are many ways to solve the problem of school food.

The important thing is to remember that we can all be on the same team with the same goal, even if we take varied paths to get there. I appreciate her wisdom because I gotta tell you — I’m not a Harvard-trained lawyer, so I rarely understand politics. I’ll focus on building skills in the kitchen for kids and advocating for food (and food marketing) literacy for all kids and follow others’ lead when it comes to societal change. <3 <3 <3

Resources We Mention About Kid Food

As an Amazon Associate, I earn from qualifying purchases.

Bettina Elias Siegel is a mom of two and a nationally recognized writer and advocate on issues relating to children and food policy. A graduate of Yale College and Harvard Law School, Bettina practiced intellectual property, advertising, and food law in New York City for almost a decade before turning to a career in freelance writing.

Her writing on children and food has since appeared in many other outlets, including the New York Times, the Guardian, the Houston Chronicle, and Civil Eats. She also appears frequently on national and local television and radio, including The Today Show, The Doctors, ABC World News Tonight, and Anderson, and she has been featured or quoted in a wide variety of publications, including The New Yorker, the Washington Post, the Chicago Tribune, Parents, Texas Monthly, and Politico.

In 2015, Family Circle named Bettina one of the country’s “20 Most Influential Moms.” Bettina lives in Houston with her husband and two children, and may be found on Twitter @thelunchtray. 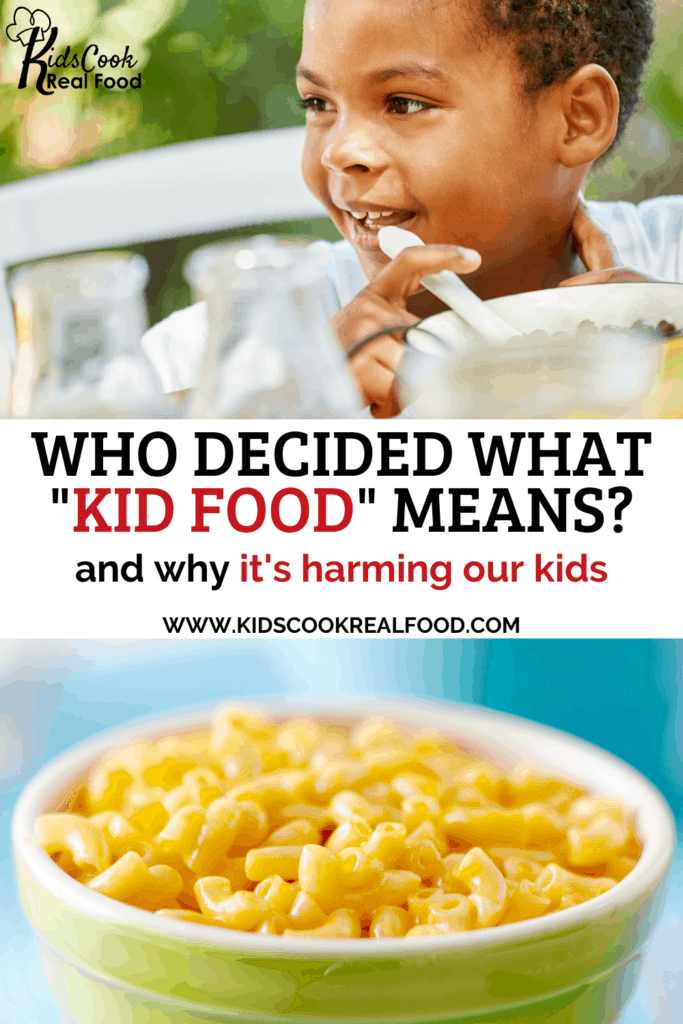 What You Should Do Next: 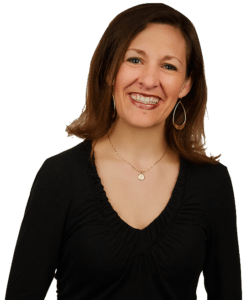 I interview experts about kids’ health every week – stay in the loop with a quick Saturday morning email:

2. Try a Free Preview of my Cooking Class for Kids

Our members’ favorite lesson is always our 10-minute knife skills and safety class, teaching techniques with unique & memorable phrases from butter knives to chef’s knives (ages 2-teen). Take a peek here and try it out with your kids.

3. Enroll in the Online Cooking Course for Kids:

Katie Kimball, CSME, creator of Kids Cook Real Food and CEO of Kitchen Stewardship, LLC, is passionate about connecting families around healthy food. As a trusted educator and author of 8 real food cookbooks, she’s been featured on media outlets like ABC, NBC and First for Women magazine and contributes periodically on the FOX Network.

Since 2009, busy moms have looked to Katie as a trusted authority and advocate for children’s health, and she often partners with health experts and medical practitioners to stay on the cutting edge. In 2016 she created the Wall Street Journal recommended best online kids cooking course, Kids Cook Real Food, helping thousands of families around the world learn to cook. She is actively masterminding the Kids’ Meal Revolution, with a goal of every child learning to cook.

A mom of 4 kids from Michigan, she is also a Certified Stress Mastery Educator, member of the American Institute of Stress and trained speaker through Bo Eason’s Personal Story Power.

Send this to a friend